Posted at 15:30h in Uncategorized by Taylor Bonds 0 Comments
0 Likes

BIRMINGHAM, Ala. – The Regions Tradition, which in 2022 celebrates being part of a now 30-year history of professional golf in the Birmingham/Hoover (Alabama) metro area, has been extended for nine years and will continue being played at Greystone Golf and Country Club through at least 2032, the Tour and Regions Bank jointly announced today.

“We are grateful to have Regions Bank as part of the PGA TOUR Champions family,” said PGA TOUR Champions President Miller Brady. “Their long-term commitment to our Tour and the Birmingham community is a clear sign of their support and passion. The Regions Tradition has solidified itself as a player-favorite on the Champions Tour because of the impressive fan support and the outstanding course and hospitality, and with an ongoing and growing commitment to charitable giving, I’m excited to see the positive impact this tournament can make for years to come.”

The Regions Tradition, one of five major championships on PGA TOUR Champions, has been played at Greystone Golf and Country Club in Birmingham, Alabama, since 2016. Bernhard Langer, who has won a PGA TOUR Champions-record 11 majors, captured the first two Regions Traditions held at Greystone in 2016 and 2017. Miguel Angel Jimenez (2018), Steve Stricker (2019) and defending champion Alex Cejka have won the last three titles at the Regions Tradition. Regions Bank has been the title sponsor of the event since 2011, with the tournament held at Shoal Creek Club in Shoal Creek, Alabama, from 2011 to 2015.

“Regions Bank has a longstanding commitment to making life better in the communities we serve, and for 30 years, the Regions Tradition has provided a forum for great, hall-of-fame caliber golf and giving back to the community we call home. We’re honored to continue to sponsor this important event,” said John Turner, President and CEO of Regions Financial Corp. “Over its lifetime, the tournament has raised more than $20 million for local nonprofits, with the highest levels of support going to the tournament’s primary beneficiary, Children’s of Alabama.”

Fundraising benefits extend beyond Children’s of Alabama hospital in Birmingham, as well. Last year, one of the tournament’s official charity partners, On River Time, was named the 2021 PGA TOUR Champions Charity of the Year. On River Time aims to serve children who are survivors of abuse and neglect through life-affirming programming. Since inception in 2012, On River Time has taken close to 200 youth fly fishing and has presented more than 20 scholarships to graduating seniors and developed year-round programming entitled “SOAR – Success, Opportunity, Attitude and Resilience.” As the Charity of the Year recipient, On River Time receives a $30,000 donation from PGA TOUR Champions, and the funds are used to take teens on fly fishing trips at The Lodge at Palisades Creek in Irwin, Idaho.

Each year, the tournament also hosts the Junior Regions Tradition powered by Alabama Power, a competitive and developmental golf experience celebrating junior golf and advancing growth of the game.

The predecessor tournament of the Regions Tradition spent its first 14 years in Arizona at Cochise Golf Course at Desert Mountain Club (1989-2001) and the Prospector Course at Superstition Mountain Golf and Country Club (2002). The tournament spent eight years in Oregon at The Reserve Vineyards and Golf Club (2003-06) and the Crosswater Club at Sunriver (2007-10) before moving to Alabama. 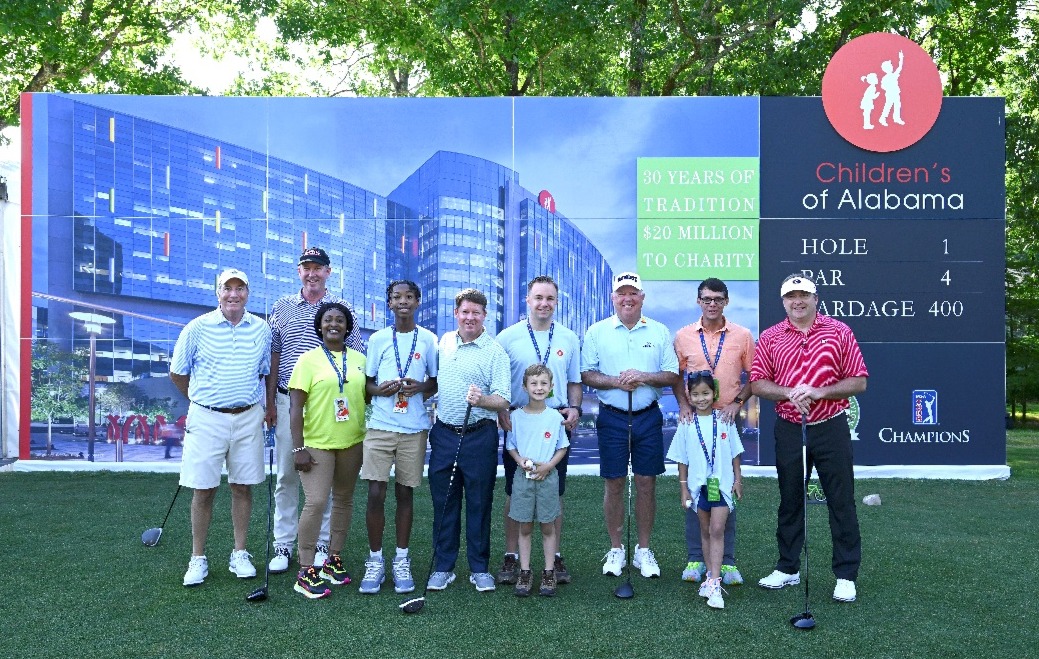 PGA TOUR Champions is a membership organization of professional golfers age 50 and older, including 34 members of the World Golf Hall of Fame. The Tour’s mission is to provide financial opportunities for its players, entertain and inspire its fans, deliver substantial value to its partners, create outlets for volunteers to give back and generate significant charitable and economic impact in tournament communities. Follow PGA TOUR Champions online at PGATOUR.com, at facebook.com/PGATOURChampions, on Twitter @ChampionsTour, on Instagram @pgatourchampions and on TikTok (pgatourchampions).

Regions Financial Corporation (NYSE:RF), with $164 billion in assets, is a member of the S&P 500 Index and is one of the nation’s largest full-service providers of consumer and commercial banking, wealth management, and mortgage products and services. Regions serves customers across the South, Midwest and Texas, and through its subsidiary, Regions Bank, operates approximately 1,300 banking offices and more than 2,000 ATMs. Regions Bank is an Equal Housing Lender and Member FDIC. Additional information about Regions and its full line of products and services can be found at www.regions.com.